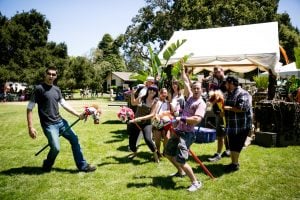 The Right Stuff is sort of a Scavenger Hunt which relies on the varied interests and knowledge within a typical group. The goal is to complete a series of tasks and come back with The Right Stuff. To complete a task, the team must decipher the hidden meaning of a short statement which contains the location they seek and the task to be performed once they get there. Teams receive one task at a time and must successfully complete that task before receiving the next one. If a team is stumped they can come to the game facilitator for help. The amount of help they receive will depend on how much they need it and the general mood of the facilitator. Each team will complete the same tasks but in a different order. The game has been written so that the players will have as little impact as possible on the public and staff at the location. Most of the tasks require a written answer with a few requiring a photo. A couple of the tasks can be completed without going anywhere. Each team is given a map of the area used for the game. Using the map along with the task is essential. The task by itself will seem to be gibberish without looking at the map.

The Right Stuff is fun and oftentimes frustrating … kind of like life. In trying to resolve the cognitive dissonance inherent in the tasks the team will learn to see things in a whole new way.

Located in Northern California - in the heart of Silicon Valley - Amazing Events was founded in 1981 and has provided event design and production services to companies throughout the world since that time.