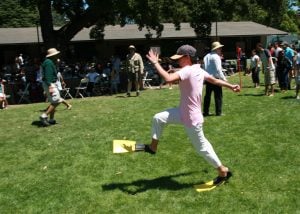 Hula Hoop Relay – Team forms a line holding hands. The goal is to transfer the hula hoop from one person to the next down the line without letting go of the person next to you.

Flipper Relay – First person dons flippers and, at the whistle, runs down to the mark and back where he gives the flippers to the next team member. First team to have all its members complete the run wins.

Land Ski – The “skis” are a pair of boards with ropes attached. A team of three puts one foot on each board and takes the end of each rope in their hands. To move the skis to the other end of the course and back takes teamwork and communication.

Sack Race – The classic brought back.

Water Launcher Ball Basher Relay – Teams must move their ball to the finish line using only water power from a large squirt gun.

Water Balloon Toss – Players toss a water balloon back and forth at greater and greater distances.

Bucket Brigade – The object of the game is to transfer a full bucket of water to an empty one, one cup at a time.

Treacherous Transport – 4 ropes are attached to a small platform. By tightening and slacking the correct ends of the rope, the team moves the platform from one point to another.

Water Balloon Catapult – The catapult requires three people to operate it; two to hold and one to aim and shoot. Basically it’s a giant slingshot using people as supports

Tacky Tourist Relay – Two players at a time carry a bag to a station, don the attire in the bag, and come back, return the clothing to the bag and hand off to the next two players.

Cornhole – Teams must toss 4 bean bags through a 6” hole on a 2’x4’ platform. Each team member tosses once. Play continues through the team lineup until 4 bags are sunk.

Puzzle Challenge – Each team receives a bag of puzzle pieces and a silhouette of a shape. The team must assemble their puzzle pieces into the shape shown using all of the pieces.

Located in Northern California - in the heart of Silicon Valley - Amazing Events was founded in 1981 and has provided event design and production services to companies throughout the world since that time.